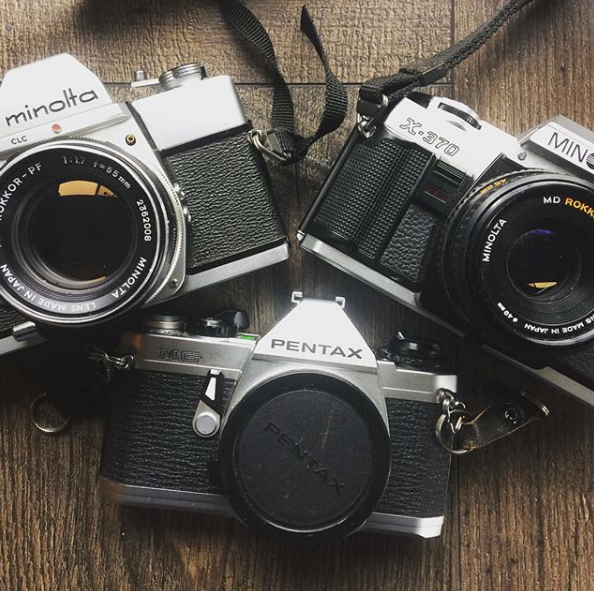 Every time I shoot I learn more. I have been absorbing
as much as possible by injesting information from youtube
videos and a constant flow of library hauls from the local library.

My buddy Brian first turned me on to 35mm last year (verify date of his pics)
when he showed me some pictures he took on a Minolta SRT-201.
They looked so vintage and I immediately wanted to know his process.

He also knew how to develop film but doing it in an alternate way,
developing color film using a black and white process, due to the lack of
chemicals.

He mentioned how he got his camera body with lens for around $20.
I found an SRT-101 with a macro lens for around that much.
Shot on that for a while. Come to find out I was loading the film backwards.
Began shooting some decent rolls. Then came across the X-370 and 3 or 4 lens
at a Salvation Army store. This camera has an Automatic feature that
shows what the light metering is. I love this camera. I have heard the X-700
would be a nice upgrade.

I took the X-370 to China with a box of Fuji Superia film. I was getting better
at focus, depth of field and began shooting more in Manual mode. Learned
a lot faster about ISO, shutter speeds and F Stops.
I went to China for two weeks for an adoption. My family was
adopting a little boy from China so I had to travel there for two weeks.
I travelled with a group of other adults that were adopting also.
I shot a small collection of photos of the kids from that group.
I also loved seeing all the motor bikes- battery powered, not gas.
The air was so heavy. It was July.